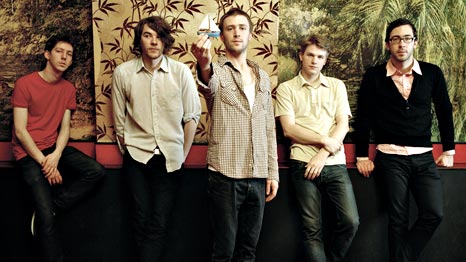 Pete and the Pirates

Pete and the Pirates were internationally-successful, Reading-based, indie rock band, consisting of Thomas Sanders (vocals), Peter Hefferan (vocals and guitar), David Thorpe (guitar), Peter Cattermoul (bass) and Jonny Sanders (drums).Formed in Reading, Brothers Tommy Sanders and Jonny Sanders grew up playing music together in Reading and it was while attending Maiden Erlegh School where Johnny met Guitarist David Thorpe and played in a band with him. It was not until after they all left school that they met with Bassist Peter Cattermoul and Guitarist Peter Hefferan, who had also played music together in their late teens: The band was formed.

Pete & the Pirates, cut their teeth playing shows around Reading. It was when the band were invited on a short tour with all-girl punk band Wetdog, which took them to play at The Spitz in Spitalfield Market that they were picked up by a new indie label Stolen Recordings. The band continued to build their reputation as an exciting live act, leading to the production of their first EP.

Rough Trade wrote of the EP “The six tracks have folk bits, byrdsy harmony bits, kraut-rock frug-outs, punk blasts of power and superb pop moments all segued and strewn together carelessly but precisely. It’s oddball and charming and would sit perfectly next to the englishness of the Mystery Jets or Wire, although they sound like neither.”[3] After the release of their first EP, the band continued to win support from the likes of Steve Lamacq on his ‘In New Music We Trust’ radio show on BBC Radio 1 and Mark Riley on 6 Music, where they have achieve playlists and recorded sessions, alongside Stephen Merchant (co-creator of the Office).

On 25 August 2007 the band played in the Carling Tent at Reading Festival. They also played guerilla gigs in the campsite later that day, which caught the attention of NME who featured an article in their magazine. After the release of their second album in 2011, their music has been used in a variety of trailers such as in an episode of The Protector and of American Horror Story, also in a trailer for the fourth season of Breaking Bad. Additionally one of their songs appeared during the end credits of the Channel 4 show Sirens. Although Mr Understanding was the band’s biggest track to date and has featured on many TV shows including The Inbetweeners and also in the trailer for the film Hamlet 2 starringSteve Coogan.”Despite such success, Activity from the band became quiet in late 2012, and in October 2012 Mark Riley confirmed on 6 Music that they had split up. No Statement was released regading their split, with Riley being the only one to break the news.

Despite such success, Activity from the band became quiet in late 2012, and in October 2012 Mark Riley confirmed on 6 Music that they had split up. No Statement was released regading their split, with Riley being the only one to break the news.There are signs of more great music from these Reading Musicians on the horizon though; Tommy, Jonny and Peter Cattermoul have reformed under the name ‘Teleman’ with a single due out in January 2013.