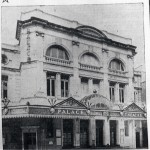 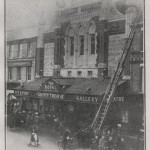 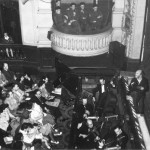 The Palace Theatre was built by W.G.R. Sprague in the Adam (neoclassical) style with an exterior that resembled his Wyndham’s Theatre in the West End of London. The interior included various seating areas including the stalls, a dress circle, several upper circles and box seating for the most expensive tickets. The backstage could accommodate up to 60 performers and the building employed concrete as a fire safety feature.

As a variety theatre it hosted a range of arts performances, including comedians, clowns, musicians, and later (in the 1950s) even nude shows to compete with the rise of TV. It also hosted many opera, musicals and pantomimes; a production in 1944 was the 24th annual resident pantomime, and so it must have been hosting them since 1920. Alma Cogan also reportedly made her debut performance at the Palace.

The building opened in 1907 with a variety performance that included a Bioscope (a type of early movie theatre). In 1937 its rival theatre, the Royal County Theatre (Friar Street), burnt down, and so its owners (County Theatre Reading) took over the Palace in 1939 and ran it until 1960. It was then demolished within the next 2 years.

Cliff Richard and the Motorbike:

“But, I did let one other person ride that motor cycle, and that person was none other than the famous pop singer, Cliff Richard.

He was booked to sing at the Palace Theatre, in Reading, that summer and we had all saved our money to go and see this pop hero and his group, who’s name had just been changed from their original name of ‘The Drifters’ to their new name of ‘The Shadows’. Val, Crystal, Debbie, and myself were in the car park at the rear of the theatre. I’d just parked up and met the girls, who had caught the bus down. We were about to go and join the queue around the front of the theatre when I heard Val gasp and I looked up to see the singer standing there. We were all very surprised when he came over and said hello.

The thing that impressed me the most was his good manners. Up to that time I’d thought that he was a bit of a loud-mouthed, mad rock ‘n’ roll singer, and I wasn’t at all prepared for his rather posh English accent and his quiet mannerisms. He was very good to the girls, signing their autograph books and posing for some photographs that Val took of him. Then his attention turned to my motor cycle.

He asked me all about the little machine and explained that he’d been thinking of getting one for himself. Now, I hadn’t let anyone on my motor cycle, but he seemed such a decent chap that I offered him a chance to ride it around the car park. Much to my amazement he was delighted by my offer and, after I’d explained the gear change in more detail, he hopped on and we watched him ride the machine half a dozen times around the car park as if he’d been riding it all his life.

Finally, he stopped beside us, asked a few more questions, and thanked me very much for letting him have a go on the motor cycle. Then he asked if there was anyone who didn’t have a ticket for his show. We all assured him that we had tickets, so he thanked us once again for being good sports and was gone.”

“I remember …seeing a new Rock and Roll act at the Palace…[in] 1958 having been given complimentary tickets by I think Hacketts Record Shop as the artist was being promoted… I’m sure it was Cliff Richards when still Harry Webb & the Drifters; I thought he was good but not as good as Elvis. I’m sure it was before he became famous as the tickets were free!”

“The palace was a favourite of our family… Have got fond memoires though of the Palace like the big round goldfish bowl windows up in the ladies room. Eating chocolate peppermints in taste to after eight mints only a lot thicker and better tasting. Funny enough these were on sale freely even though there was rationing…Can remember being up in the gods really was like being in the heavens. You daren’t look straight down over the rail as you got giddy – nearly went over once.”

“Apologies to all Cliff Richards fans, but my friend’s late father’s claim to fame was that he once threw a pork pie at Cliff whilst he was on stage in Reading, and caught him ‘straight in the boat race’.”

“On the Saturdays that Dan, Mum and I used to go we also went into the Palace bar, and very often the stars of the show used to come in there to have a drink during the interval and my Dad used to ask them for their autographs.”

other 1940s: Cinderella pantomime (used an electric coach and ponies on stage)

other 1950s: Song of Norway by the RCAOS

Babes in the Wood pantomime (last ever show at the Palace)

Now: a block of flats

Some of the many performers to play at the Palace include:

Cliff Richard and the Drifters

Reading Theatres, Cinemas and Other Entertainments, 1788-1978 by Daphne Phillips

at the Job Centre, turn right down Friar Street – Sub 89 is on your right as you head towards town

RED ROUTE
Anti-clockwise to
THE HEXAGON

with Amplifon on your right, continue along Cheapside – at Oxford Road, cross the road and then turn right – shortly after, turn left down a pedestrian walkway – the Hexagon is at the end on your right

at the Job Centre, turn right down Friar Street – Sub 89 is on your right as you head towards town

BLUE ROUTE
Anti-clockwise to
THE HEXAGON

with Amplifon on your right, continue along Cheapside – at Oxford Road, cross the road and then turn right – shortly after, turn left down a pedestrian walkway – the Hexagon is at the end on your right